Artist:Makoto Hatori
Title:Physicality: Sumi-e/ Suiboku Sansui (07-03-1)
Statement:Statement:  An awareness of the external is the result of a reciprocal interaction with a stimulating other, an uncertain element that is unsure of the completed form. The non-object-like
object, the “as it is,” is born from an ephemeral subject that coexists with and reaches far into the uncondensed external world. Aggressively capturing the unmade, the undefined, synchronizing
with the other and becoming a continuously transforming body is an aesthetic expression that demonstrates a lively physicality.
Human bodies are an ambiguous existence in the first place, a physical existence equipped with both an internal and external. Mutual interactions between oneself and others are established
because it is possible to relate to the external, and this happening is generated simultaneously. The work entitled "Physicality" relates the otherness or externality of its physical state as a
living phenomenon of that corresponding relationship. The non-autonomous condition of occurrence is to continuously change its synchronization with the other.
Ceramic art is rooted in the earth. Although clay is usually considered a mere base material of ceramic art, the clay itself exists in its own right as the concept and motif of my work. By
exploring the materiality of the medium and attempting to grasp its essence, I extend this traditional art form into contemporary art. By choosing not to apply glazes, thus rejecting artificial
aesthetic enhancement, I contemplate the object’s inner essence. In this way, my work becomes conceptual art and seeks to transcend the so-called autotelism often associated with ceramics
(the notion that a ceramic object becomes a work of art through the process of firing, and is an end in itself, often lacking conceptual framework).
In this line of conceptual exploration, I consider the interaction between ‘ink’ and ‘paper’ and how they co-exist within my suiboku sansui; thinking of ‘paper’ as not only a support surface
but an integral part of the image and creating an image not through ‘painting with ink’, but rather letting the ‘ink’ interact with ‘paper’. Through this approach, and by omitting color, this
work aims to visualize the essence of reality and express physicality. Translating ‘surface’ into ‘line’ that embodies ‘physicality’ leads to a kind of expansive image-making that is synergetic
and reciprocal. Moreover, by leaving out superficial qualities that appeal to the senses, the colorless world (the highest realm in Buddhist spirituality) and our spiritual core can be captured.
Within this co-embodied work using seemingly disparate materials, the iron rod is the external ‘other’ (to clay) and can be likened to an extension of the hand, like a painting brush. The
surface of non-glazed ceramics represents the texture of Japanese paper; the milky white surface represents the Pure Land (Buddhism); and, with black pigments added, the grey surface
symbolizes the Underworld. In my ‘non-color’ monochromatic ‘drawing’, the ceramic forms become a kind of conceptual ink and paper. Achieving such unification of different physical
properties, this work could be seen as a three-dimensional drawing that manifests physically. 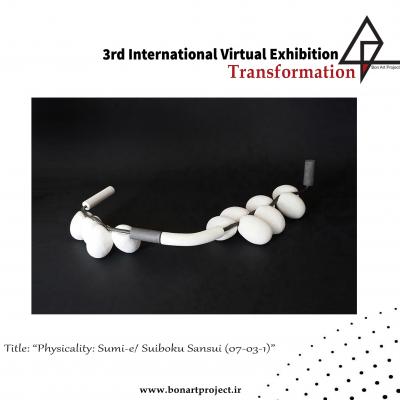 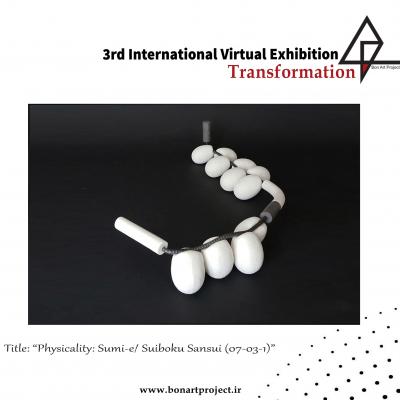